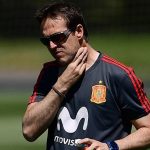 The Spanish national team coach Julen Lupetegui has been axed by the Spanish Football Association after he secretly agreed to manage Real Madrid by the end of the World Cup, according to reports.

The former Los Blanco reportedly agreed to replace Zidane at Real Madrid fortnight ago, and this seemed to have taken a new turn in his career as the Spanish national team manager.

Spain hastily called a press conference as reports emanated that the head of the Spanish FA, Luis Rubiales, was left outraged by the timing of the announcement.