Hazard scored a first half penalty to help Chelsea beat Man United 1-0 in the FA Cup final on Saturday’s evening. One moment of brilliance from Hazard decided the final outcome as the Belgian raced past Phil Jones who brought him down inside the penalty box, awarding Chelsea a penalty. Hazard stepped up brilliantly to send David De Gea the wrong way.

Although, Man United dominated the match from first half but failed to pull one past the Chelsea’s goalkeeper who made a string of saves to keep his team in contention. The FA Cup triumph meant under fire Chelsea boss, Conte had delivered another trophy for the Blues following the league triumph of last season. It remains unclear if the FA Cup would be the manager’s last match in charge

For the EIGHTH time…

Sevilla stunned football world last night after completing a remarkable comeback after going down 3 goals to Liverpool in the  first half of a football match on Tuesday night. This Epic comeback has reminded us of some great moments of comeback in a single match in Champions League. 6. Manchester United 4 Real Madrid 3…

Philippe Coutinho​ will not be heading back to Liverpool this summer, with manager Jurgen Klopp claiming a move for the Barcelona star “is just not possible” at this stage. The Brazilian left the Reds for Barcelona in a massive £142 million ($201m) deal in January 2018, but his time with the Spanish giants has not been easy….

Chelsea manager Frank Lampard has said that he was happier with his team’s performance in the 4-0 defeat to Manchester United last weekend than in their 1-1 draw with Leicester on Sunday. The Blues have not won any of Lampard’s first three competitive games in charge, having drawn in Wednesday’s Super Cup game with Liverpool and losing on…

Manchester United manager Ole Gunnar Solskjaer has looked to squash speculation surrounding Paul Pogba‘s future, suggesting there may be an agenda against the Red Devils star. In his first pre-season press conference in Australia ahead of a friendly against Perth Glory on Saturday, Solskjaer stressed the club hadn’t received any offers for Pogba with the midfielder staying in contact… 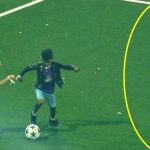 Looks like we already know what the future holds in terms of who and who takes over the football world in the next decade. We have seen different clips online where footballers’ children show some piece of skills. Ronaldo has been spotted so many times training his son how to play football. Marcelo was not…