Cristiano Ronaldo has been named UEFA Men’s Player of the Year for a second consecutive season.
The Real Madrid forward saw off competition from Barcelona star Lionel Messi and Juventus goalkeeper Gianluigi Buffon to claim the award for the third time overall.
Ronaldo struck 25 goals in La Liga last term, and 12 in 13 matches during Real Madrid’s Champions League-winning campaign.
Previous winners of the award include Messi and Barca team-mate Andres Iniesta, who claimed the prize in the 2011-12 campaign ahead of the Argentina international in second.
Elsewhere, Buffon was named the goalkeeper of the season, Sergio Ramos the top defender, and Luka Modric the best midfielder, while Ronaldo was also named UEFA forward of the year, beating Paulo Dybala and, again, Messi for the award.

Following a complaint filed to FIFA by Atletico Madrid regarding Barcelona’s attempts to approach Antoine Griezmann, the Catalans have dismissed holding any talks with the Frenchman. The Blaugrana have reportedly been in pursuit for the player’s signature, but sources from inside the club declined any negotiations with the former Real Sociedad forward’s party. “Barcelona have… 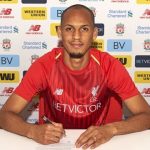 Chelsea were fortunate to beat Watford after Batshuayi came off the bench to complete a stunning comeback for the reigning champions. Chelsea opened the scoring in the 12th minute through a goal for Pedro Rodriguez. Abdoulaye Doucoure equalized for Watford in the 45th minute and Pereyra scored the second goal for the visitor early in the second…

Chelsea will be eager to put a stop to their run of games without a win for the past three matches. Chelsea will host Watford at Stamford Bridge on Saturday and are still without key man, Kante. After enduring a frustrating game against United, Liverpool will have to test their luck against in-form Tottenham Hotspur….

Manchester United seem to have forgotten how to score following a run of disappointing displays since their goalless draw against Liverpool. man United was handed a shock 2-1 defeat by Huddersfield in the Premier League on Saturday afternoon. The host had a flying start scoring two goals in the opening 30 minutes. Mourinho started Martial…

Looks like Barcelona are getting closer to sealing a deal for Neymar’s ideal replacement as per Dailymail. Barcelona’s pursuit of Philippe Coutinho was stepped up on Tuesday morning when club directors arrived in England in an attempt to close the deal so the player can make his debut against Real Madrid on Sunday. Oscar Grau,…