The former Manchester United boss, Sir Alex Ferguson reportedly undergone brain surgery after suffering brain hermorrhage last week. Although, the doctor could not guarantee his process of recovery despite the successful operation, but reports now has it that he has gained consciousness and have started speaking to his family.

Ferguson whose impact on football cannot be over-looked has received tributes all across the football world after news of his ailment broke. Former players and rivals could not hide their shock at the news and have wished for his quick recovery.

Although, Man United have not released a statement regarding his recovery, but reliable sources from Twitter have confirmed he sat up to talk to the doctor and his family.

Sir Alex Ferguson is out of a coma and showing promising early signs of recovery following emergency surgery on a brain haemorrhage. He remains in intensive care but has been sitting up talking to family and friends at Salford Royal Hospital. [Daily Mail] #MUFC

Following a controversial and hefty transfer fee from Everton to Manchester United, Lukaku has been under pressure to deliver for his new club. Some tagged his fee “waste of money” while others feel he is the man to lead Manchester United’s line of attack after Ibrahimovic left. The Premier League season kicked off last week…

The Russia 2018 World Cup draws took place in Russia earlier today and Nigeria has been drawn with a familiar opponent, Argentina. Nigeria recently beat Argentina in a friendly in Russia and would relish another opportunity to take on the South American giant. Nigeria was drawn alongside Argentina, Iceland and Croatia in Group D. See…

Manchester United have made a bid higher than that of Manchester City in order to hijack Alexis Sanchez move to the Premier league leaders . Earlier this week,Sanchez agreed personal terms in the region of £250,000 a week with Man City who is waiting on Arsenal to accept their 20million bid . According to Guardian…

Looks like Barcelona are getting closer to sealing a deal for Neymar’s ideal replacement as per Dailymail. Barcelona’s pursuit of Philippe Coutinho was stepped up on Tuesday morning when club directors arrived in England in an attempt to close the deal so the player can make his debut against Real Madrid on Sunday. Oscar Grau,… 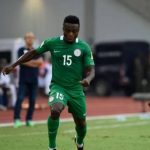 ,Russia 2018! Injured Moses Simon out of World Cup, In a huge blow to Super Eagles hopes, forward Moses Simon will not be a part of their squad to the Russia 2018 World Cup. The winger, who played a key role in Nigeria’s qualification for the tournament, has been struggling with an injury and sat…