Arsenal and Chelsea resume their London rivalry at Wembley on Sunday as the FA Cup winners and Premier League champions battle for more silverware in the Community Shield.
Arsene Wenger’s Gunners got the better of Antonio Conte’s Blues on the hallowed turf as they shocked the title winners with a 2-1 FA Cup Final victory.
The two capital clubs have played each other since then – a pre-season friendly which Chelsea won 3-0 in China – but the Community Shield will be a real test of both sides with the 2017-18 season fast approaching.
While Sunday’s match may be a charity friendly, Wenger and Conte will expect their teams to give no quarter as they look to begin the new campaign with full bragging rights.
Scroll down for Standard Sport’s comprehensive preview…
Start time
Arsenal face Chelsea at Wembley at 2pm on Sunday, August 6. 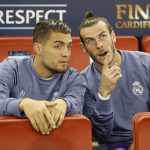