Liverpool survived an early scare in their pursuit of the league title after coming back from an early goal to beat Southampton 3-1 at St. Mary’s stadium on Friday night.

Mohamed Salah scored a brilliant solo goal and Jordan Henderson struck late as Liverpool won 3-1 at Southampton to move back above Manchester City in the Premier League title race.

Liverpool needed a Hugo Lloris error to beat Tottenham 2-1 last time out and they rode their luck again at St Mary’s Stadium on Friday, Jurgen Klopp’s side showing their nerves.

Shane Long’s 50th Premier League goal had put Southampton into an early lead but Naby Keita’s first strike for Liverpool ensured the scores were level at the interval.

Salah’s dry spell has been well-documented but he ended his eight-game wait for a goal in the 80th minute, embarking on a long solo run before finishing superbly.

And captain Jordan Henderson then made sure of the win for the Reds with four minutes to go by turning home a Roberto Firmino low cross, as Klopp’s men went two points clear at the top, albeit having played a game more than City. 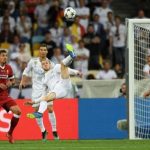