Barcelona eased to an opening day 2-0 win against Real Betis on Sunday thanks to an Alin Tosca own goal and an effort from Sergi Roberto.
The game at Camp Nou was preceded by a minute’s silence in memory of those killed in the terror attacks in the city this week, while the Barca players carried “Barcelona” on the back of their shirts where their surnames would usually appear and #TotsSomBarcelona on the front (#WeAreAllBarcelona).
In front of an attendance of just over 56,000 — Marca reported that thousands of tickets were returned after Thursday’s attacks — it was business as usual for Barca, who never looked likely to slip up against a new-look Betis side.
In other news, a Ronaldo-less Real Madrid continued to impress as they hammered Deportivo 3-0 away from the Santiago Bernabeu. Bale, Casemiro and Toni Kroos all found the back of the net as Cristiano Ronaldo begins his 5-match ban.

Look at that bring down and pass by Benzema ? Beautiful 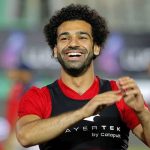