Arsenal manager have revealed that money motivated Alexis Sanchez move to Old Trafford stating that even Manchester City pulled out of the deal. He reiterated that the club had no chance of keeping the star player because of the money involved and suggested he did not understand the players choice of moving to Mourinho’s side if not money.

Wenger in an interview said he “cannot understand” the decision of a player to leave the Emirates Stadium but believes the money on offer ultimately proved too tempting for the Chile international, who was in the last six months of his Gunners deal.”I cannot understand anybody wanting to leave Arsenal. But, in 30 years of doing transfers, you learn a lot about human beings,” Wenger said.”As a professional, it was perhaps his last contract at the top level and an important contract. After that, I accept that because we accepted that we would let him go. After that, we analyse the pros and the cons.”We did what we tried to do and went as far as we could. Even Manchester City moved out of it in the end. That tells you we had no chance to give him a contract.”We have tried to find the best possible solution and the best possible solution is that we lose a world class player – I don’t deny that at all – but we did not lose him without getting somebody after. The future will tell if it was the right decision or not.

“It is not that we are only losing a player, we are gaining a player as well. And we are still active in the transfer market and trying to bring players in.”

Reports suggests that Alexis will be pocketing £450,000 a week at United which will see him become premier league best paid player. 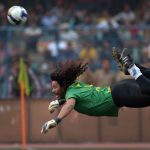